On 16 May 2022, public law no: 117-126 under the Bill H.R. 3182 was published. This law bans the sale, manufacture, and importation of inclined sleepers for infants and crib bumpers.
This ban will be effective 180 days after the date of enactment of this Act.

Public law no. 117-126, Safe Sleep for Babies Act of 2021, was enacted to ban inclined sleepers for infants and crib bumpers, regardless of the date of manufacture. These products will be considered a banned hazardous product under section 8 of the Consumer Product Safety Act, as they have been determined to be consumer products which present an unreasonable risk of injury and whereby no feasible consumer product safety standard under this chapter would adequately protect the public from the unreasonable risk of injury associated with these products.

Inclined Sleeper for infant means a product with an inclined sleep surface greater than ten degrees that is intended, marketed, or designed to provide sleeping accommodations for an infant up to 1 year old.

The state of Maryland introduced a law which restricts perfluoroalkyl and polyfluoroalkyl substances (PFAS) in various consumer products. This prohibition of PFAS will become effective on 1 January 2024.

“PFAS chemicals” are defined by the bill as a class of fluorinated organic chemicals that contain at least one fully fluorinated carbon atom, including perfluoroalkyl and polyfluoroalkyl substances and are used in fire-fighting agents, fire-fighting equipment, food packaging, and rugs and carpets.

The law also requires that sellers of personal protective equipment (PPE) for firefighters which contain PFAS must provide a written notice to purchasers at the point of sale, indicating that the PPE contains PFAS and the reason why the PPE contains PFAS chemicals. Both the seller and the purchaser of the PPE that contains PFAS must retain the notice for at least three years after the date of sale. For food packaging, rugs and carpets, manufacturers must provide a certificate of compliance (CoC) to demonstrate compliance within 30-days of request by the department.

In the US, when hazards are identified in consumer products, they will be recalled and published in the Consumer Product Safety Commission (CPSC) Recent Recalls on the CPSC website, which is updated daily. The US recalls from 01 May 2022 to 31 May 2022 are summarized below: 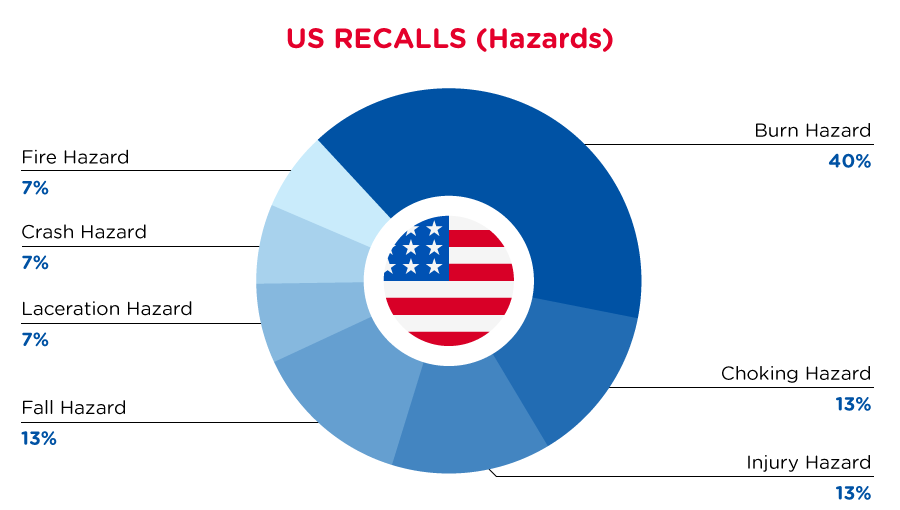 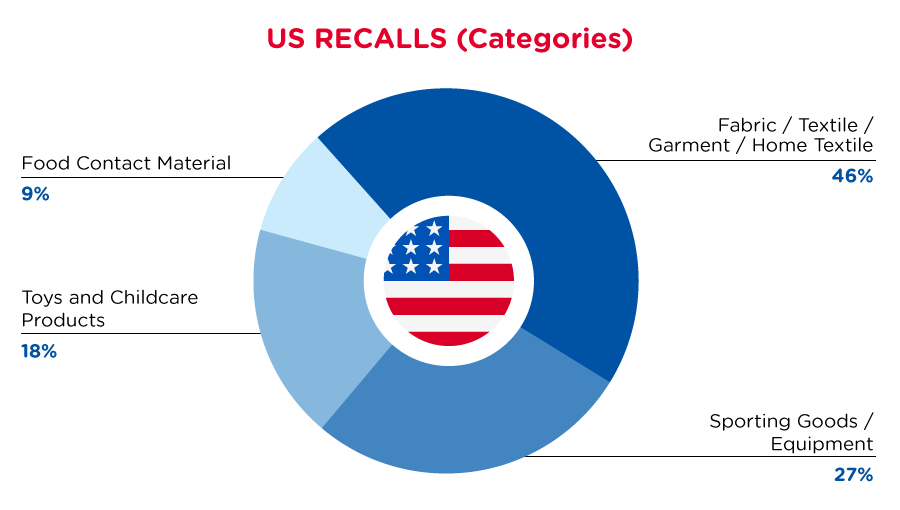 
Canada opened a consultation period for its proposed regulation on certain toxic substances, intended to repeal and replace the prohibition from 2012, under the Canadian Environmental Protection Act, 1999 (CEPA). If approved, the new law will enter into force six months after its publication.

On 14 May 2022, a proposed Prohibition of Certain Toxic Substances Regulations, 2022 was published in the Canada Gazette, Part l to repeal and replace the nation’s Prohibition of Certain Toxic Substances Regulations, 2012. A 75-day public comment period is open until 28 July 2022. Such regulation will help to improve environmental quality and control the release of toxic substances into the environment over time. The new law would enter into force six months after publication in the Canada Gazette, Part II.

The proposed regulation will further restrict the manufacture, use, sale, and import of the following substances, and products containing them, by removing certain exemptions or limiting the activities:

There are two new substances, Decane Plus (DP) and Decabromodiphenylethane (DBDPE), proposed for the prohibition in all products, with several exemptions. The legal text would be further simplified to consolidate all substance-specific exemptions into one schedule.

The proposed legislation would define the concentration thresholds for these substances. If the substance is present at or below the limit value, it is considered an incidental presence. Hence, the prohibition would not be applicable. The details of the threshold limits are shown in below table.

In Canada, when hazards are identified in consumer products, they will be recalled and published in the Recalls and Safety Alerts Database on the Health Canada website, which is updated daily. The Canada recalls from 01 May 2022 to 31 May 2022 are summarized below: 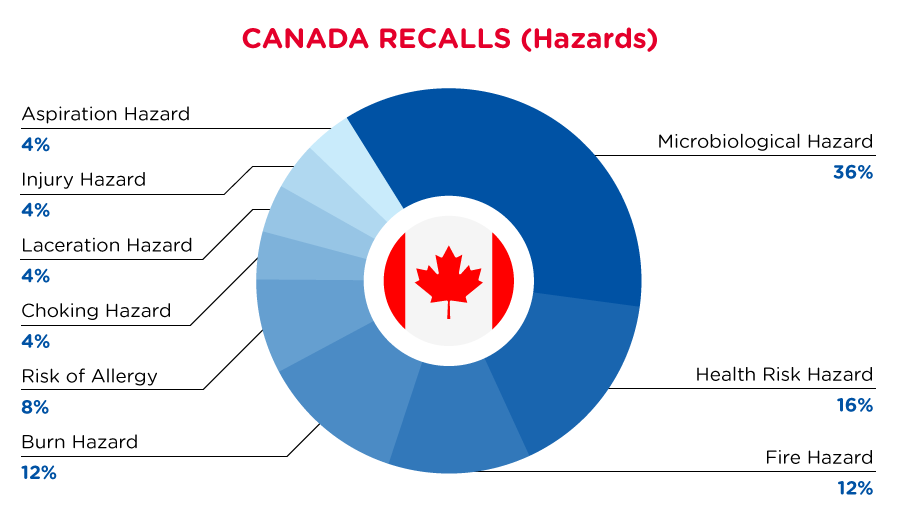 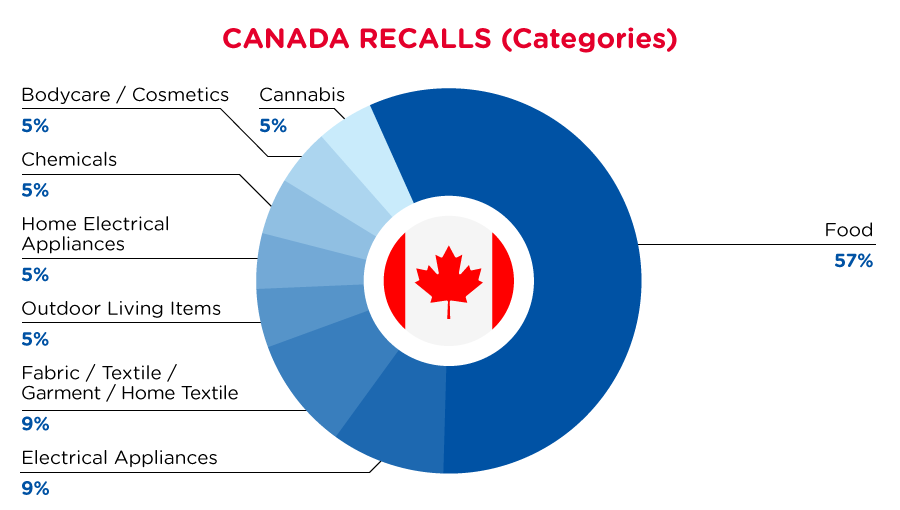 
On 31 March 2022, the Brazil National Institute of Metrology, Quality and Technology (INMETRO) published Ordinance No. 148 which revokes Ordinance No. 371 of 29 December 2009, to approve Conformity Assessment Requirements and Specifications for Household Electrical Appliances.

This Ordinance will enter into force on 2 May 2022, as determined by Article 4 of Decree No. 10.139, of 2019 which provides for “the review and consolidation of normative acts inferior to the decree issued by bodies and entities of the direct federal, autarchic and foundational public administration.”


On 13 May 2022, the Australian Competition and Consumer Commission published the furniture toppling consultation paper on the assessment of regulatory options.
The consultation closed on 13 June 2022.

As outlined in the consultation paper addressing a Mandatory Standard for Toppling Furniture, freestanding storage furniture such as chests of drawers, cupboards, wardrobes, storage units, bookshelves, and entertainment units, pose the greatest risk of toppling over resulting in injury or death. The risk of tip over events is most likely to occur when children attempt to climb furniture, as the weight of a child standing on an open drawer or shelf shifts the center of gravity forward.

The proposed regulatory options in this Consultation Paper published by the Australia Competition and Consumer Commission (ACCC) will apply to storage furniture such as chests of drawers, cabinets and wardrobes, with a height greater than 50mm, and bookshelves and bookcases with a height greater than 600mm. No minimum height has been set for entertainment units because there is a greater need for stability and anchoring when televisions are placed on top of them.

As directly specified in the Consultation Paper, the ACCC was seeking feedback on the following options, including the likely effectiveness and cost of each:

In Australia, when hazards are identified in consumer products, they will be recalled and published in the Recalls and Safety Alerts Database on the Australian Competition & Consumer Commission website, which is updated daily. The Australia recalls from 01 May 2022 to 31 May 2022 are summarized below: 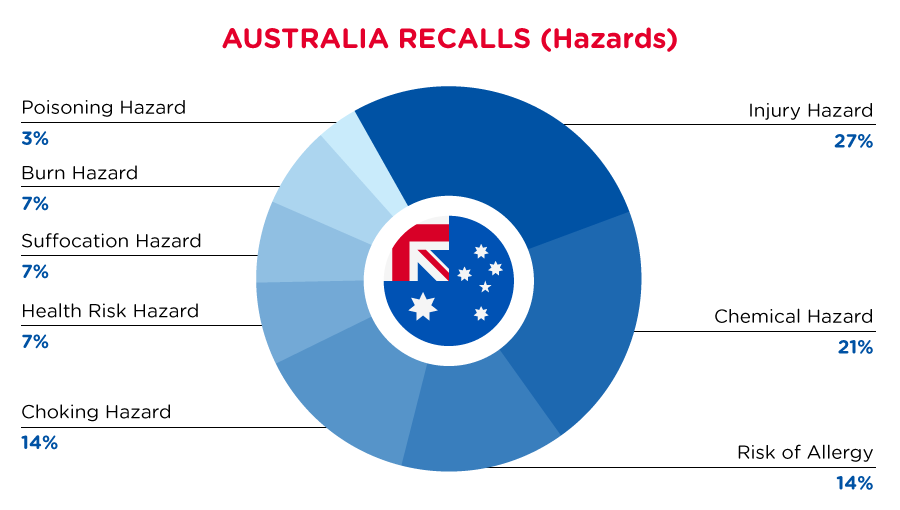 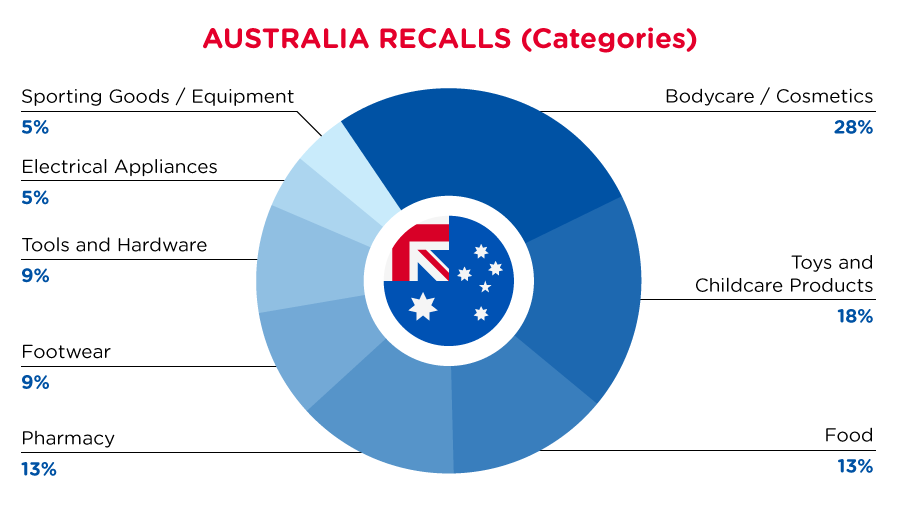 The International Organization for Standardization recently published a new version of ISO 4531 for food contact vitreous and porcelain enamels. This new version is effective immediately as it replaces the 2018 version.

In April 2022, the International Organization for Standardization (ISO) published ISO 4531:2022 for testing food contact enamelled articles. This standard specifies a simulating method of testing for determination of, as well as the limits of, the release of metal-ions from enamelled articles, including tanks and vessels which are intended to be used for the preparation, cooking, serving, and storage of food.

The new standard is effective immediately. In comparison to the 2018 version, it has several important updates including the below:

The migration limits of sixteen heavy metals are summarized in the below table.

In Europe, when hazards are identified in non-food consumer products, the products will be recalled and published in the Safety Gate system, which is updated weekly. The European recalls from 01 May 2022 to 31 May 2022 are summarized below: 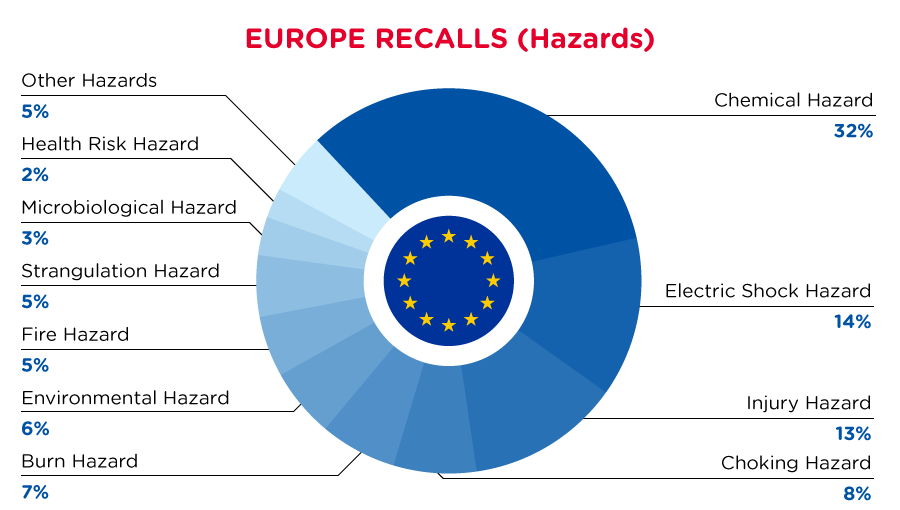 *Other Hazards include Damage to Sight, Fall Hazard, Drowning Hazard, Suffocation Hazard and Damage to Hearing with a frequency of less than 4. 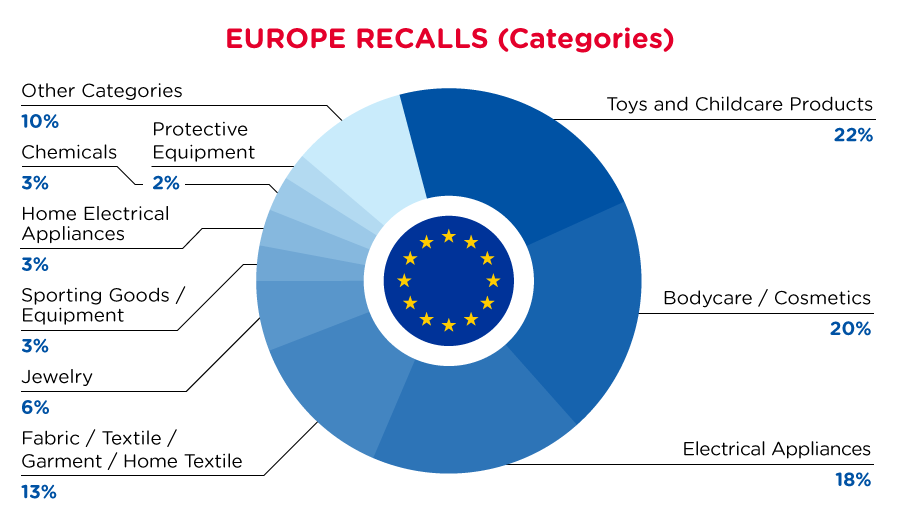 *Other Categories include Footwear, Outdoor Living Items, Machinery, Tools and Hardware, Accessories, Car Components and Furniture with a frequency of less than 3. 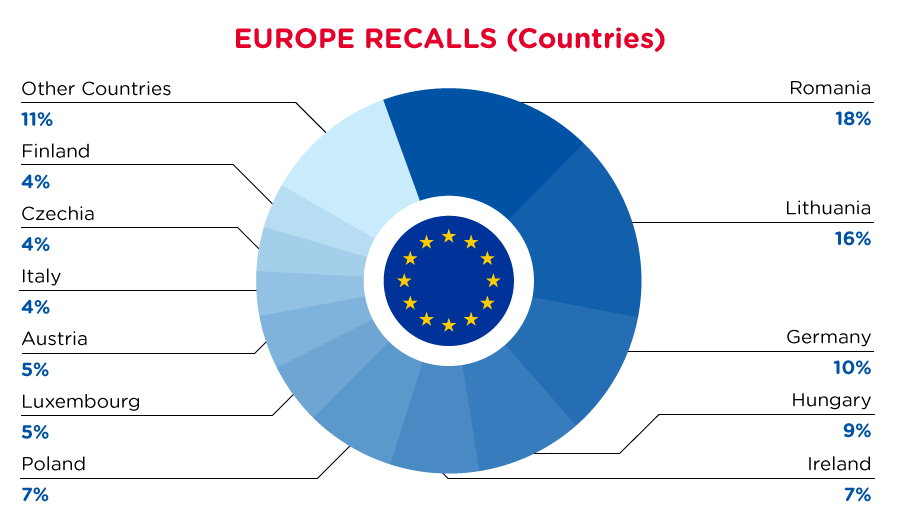 *Other Countries include Belgium, France, Sweden, The Netherlands, Estonia, Iceland, Greece, Croatia and Latvia with a frequency of less than 5.

The main technical changes (relative to the requirements and/or test methods) in comparison to the previous edition, QB/T 4331-2012, are identified below.

Revisions include, but are not limited to, those for:

In China, when hazards are identified in consumer products, they will be recalled and published in the SAMR Defective Product Administrative Centre, which is updated daily. The China recalls from 01 May 2022 to 31 May 2022 are summarized below: 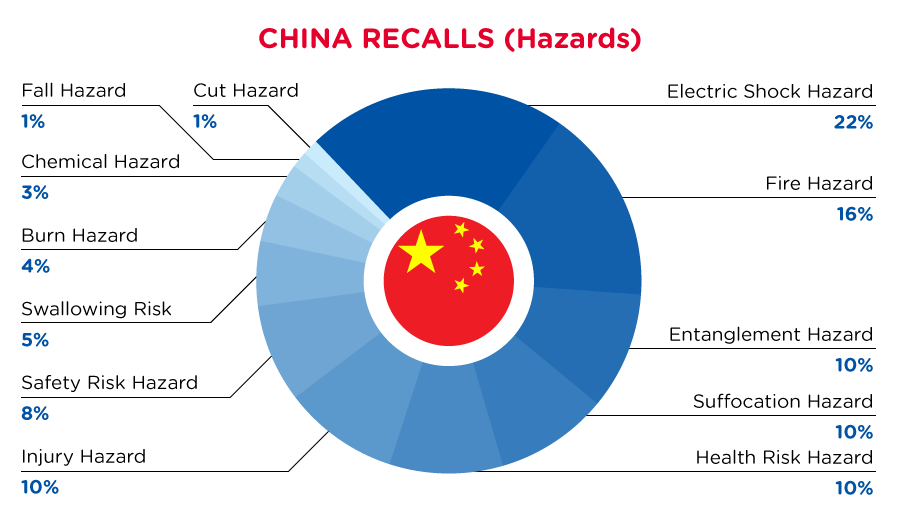 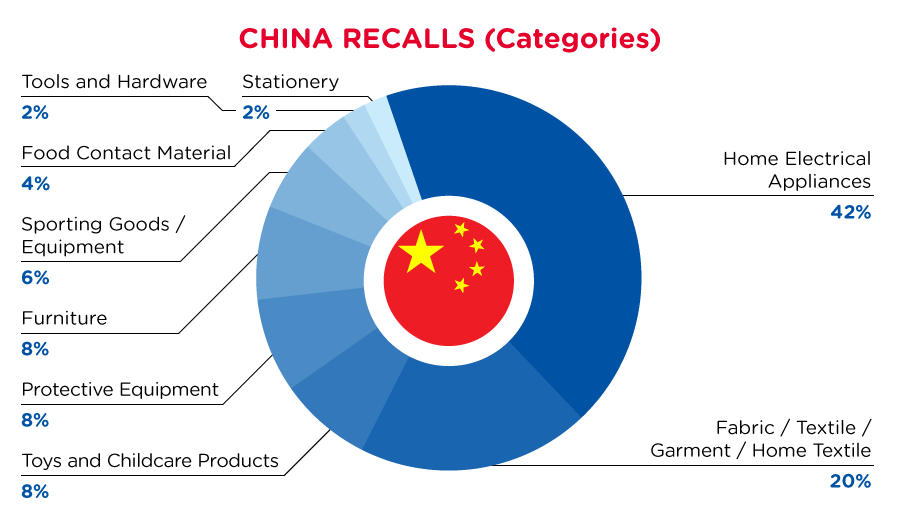 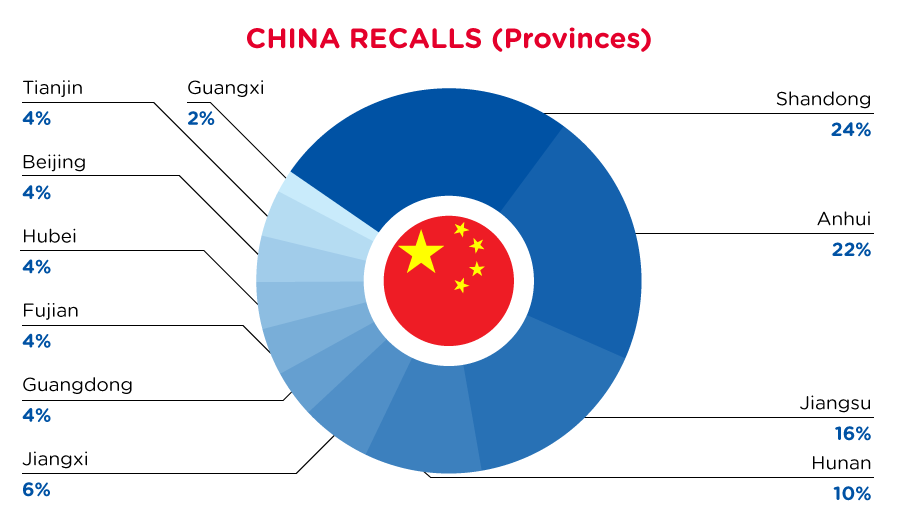