In September 2021, the US Environmental Protection Agency (EPA) prepared for publication a draft final rule extending the deadline for compliance with the TSCA Section 6(h) ban on a particular PBT chemical (i.e., phenol, isopropylated phosphate (3:1) (PIP (3:1)) until 8 March 2022. The publication date for the final rule, which will be followed by a 60-day comment period, has not been determined.

Despite EPA’s extensive outreach conducted during development of the PBT rules, some comments from the stakeholders on PIP (3:1) were still received after the rule was finalized. In response to this, the EPA issued a 180-day “No Action Assurance” in March 2021 to ensure that the supply chain was not interrupted and issued a notice requesting further comments and information on the impact of the compliance dates until 4 September 2021. However, a need for varying time frames to remove PIP (3:1) from the supply chains has been identified. The EPA will issue a final rule (follow by a 60-day comment period) providing a short-term extension of compliance dates until 8 March 2022.

PIP (3:1)-containing articles covered by the short-term compliance date extension include cellular telephones, laptop computers and other electronic devices. In addition, articles that might be used in industrial and commercial equipment used in various sectors including transportation, life sciences, and semiconductor production, as well as other consumer and commercial goods are included.

At the same time, the EPA announced its intent to initiate a new rulemaking and anticipates proposing new rules for all five PBT chemicals that are the subject of final risk management rules under TSCA in the Spring of 2023. The current provisions of the final risk management rules, except the extension of the specified compliance dates for PIP (3:1), remain in effect while the EPA is working on this new rulemaking effort.

Below is a summary on the potential usage, scope, requirement, and effective date for the five PBT chemicals.

In the US, when hazards are identified in consumer products, they will be recalled and published in the Consumer Product Safety Commission (CPSC) Recent Recalls on the CPSC website, which is updated daily. The US recalls from 01 August 2021 to 31 August 2021 are summarized below: 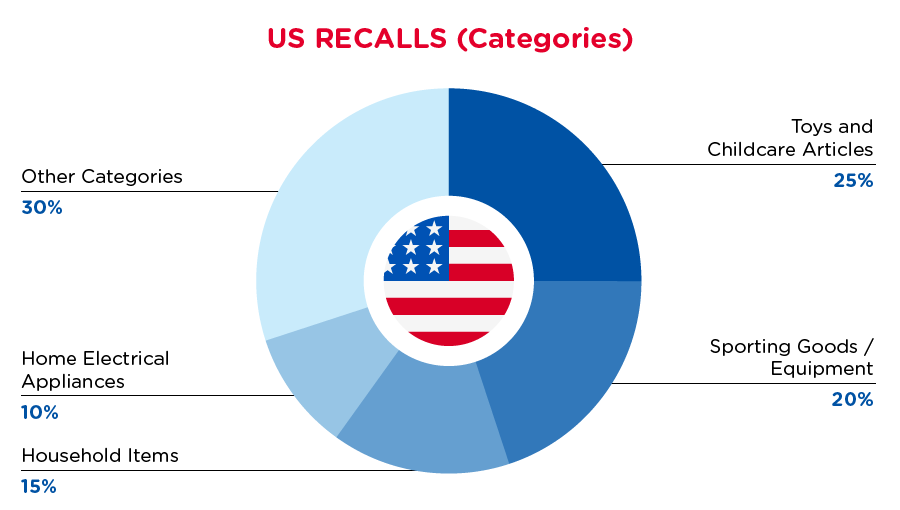 *Other Categories include Outdoor Living Items, Tools and Hardware, Electrical Appliances, Furniture, Stationery and Fabric / Textile / Garment / Home Textile with a frequency of less than 2.

In Canada, when hazards are identified in consumer products, they will be recalled and published in the Recalls and Safety Alerts Database on the Health Canada website, which is updated daily. The Canada recalls from 01 August 2021 to 31 August 2021 are summarized below: 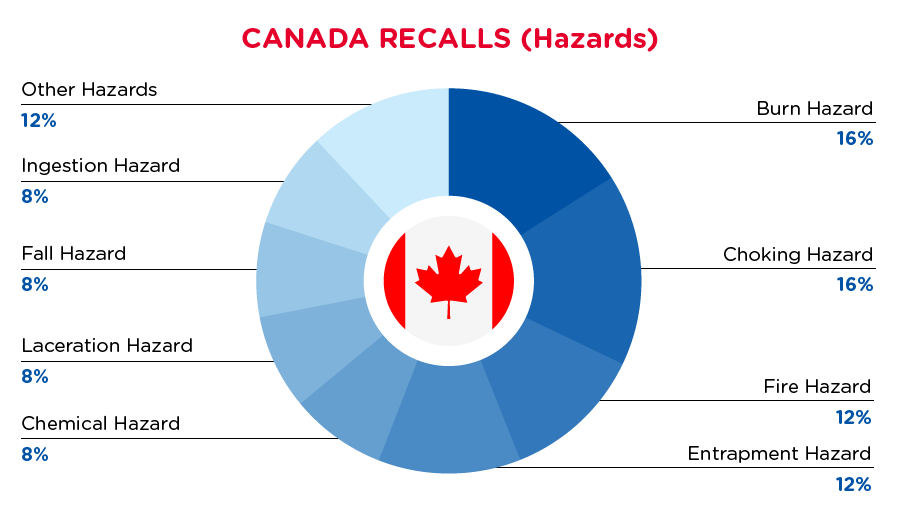 *Other Hazards include Swallowing Risk, Injury Hazard and Crash Hazard with a frequency of less than 2. 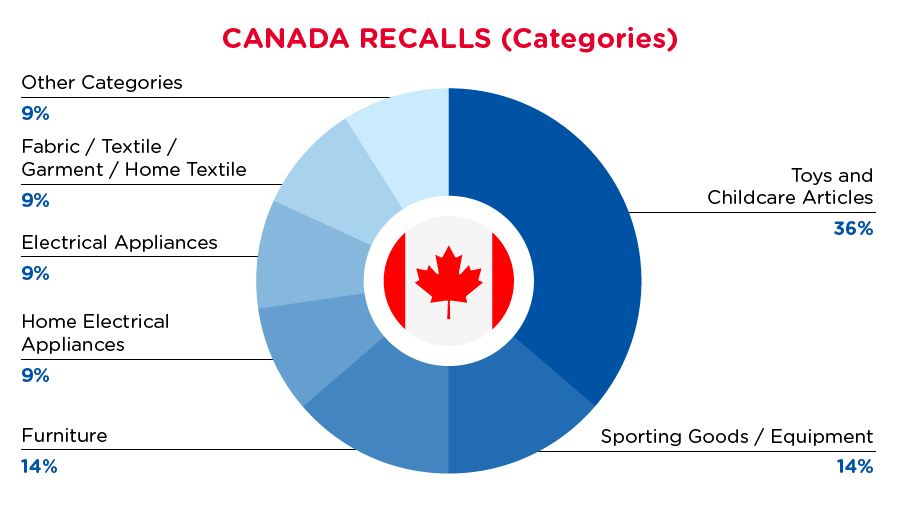 *Other Categories include Household Items and Food Contact Material with a frequency of less than 2.

Four proposals to identify new SVHCs were published on 3 September 2021. They are under public consultation and available for comments until 18 October 2021.

The four substances in this new batch of proposals that might be included in the upcoming update of the SVHC candidate list (expected in early January 2022) are listed below. The candidate list would increase to 223 substances if all of them are included.

On 28 July 2021, the European Commission (EC) published Notification 2021/0513/I on Italy’s intention to expand the positive list of food contact stainless steels.

According to the Notification, there are two important changes addressed:

In addition, the three months standstill period will end on 29 October 2021.

EU: European Directorate for the Quality of Medicines & HealthCare (EDQM) Issues Guideline for Food Contact Paper and Board

In May 2021, the European Directorate for the Quality of Medicines & HealthCare (EDQM) published the first edition of the technical guide entitled “Paper and board used in food contact materials and articles”.

This guidance aims to improve the protection of consumers against contaminants potentially released by paper and board in contact with food.

EU: A New European Standard of Seating for Children has Been Published

The European standard of seating for children (EN 17191:2021) has been prepared under a standardization request given to the CEN by the European Commission and the European Free Trade Association and supports essential requirements of EU Directive 2001/95/EC.

This standard specifies safety requirements, test methods and labelling requirements for children’s seating products intended to be placed on the floor, for use in both domestic and non-domestic settings, including day care centers, as well as for indoor and outdoor use. The requirements are specifically intended for children who are able to walk and sit by themselves.

This standard does not apply to children’s highchairs or childcare articles such as reclined cradles and seating in educational institutions for which other European standards exist.

In Europe, when hazards are identified in Non-food Consumer Products, the Products will be recalled and published in the Safety Gate system, which is updated weekly. The European recalls from 01 August 2021 to 31 August 2021 are summarized below: 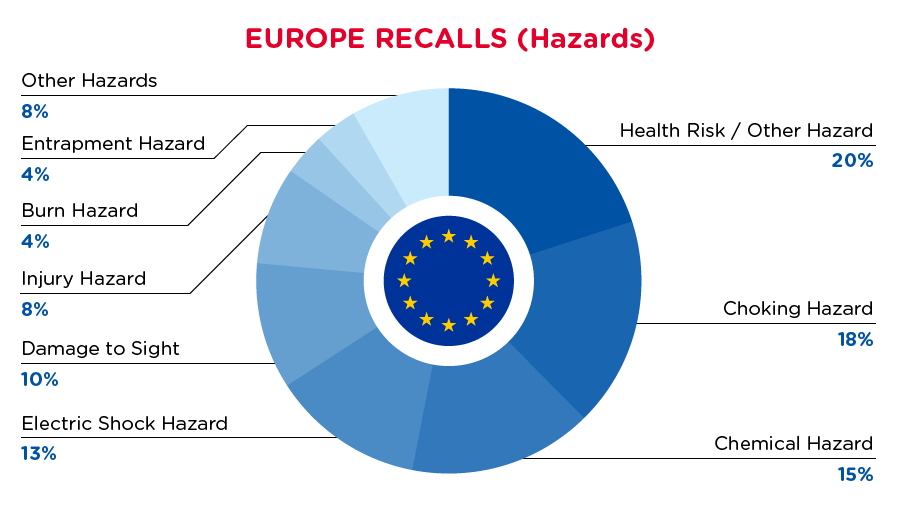 *Other Hazards include Strangulation Hazard, Environmental Hazard, Cut Hazard and Fire Hazard with a frequency of less than 3. 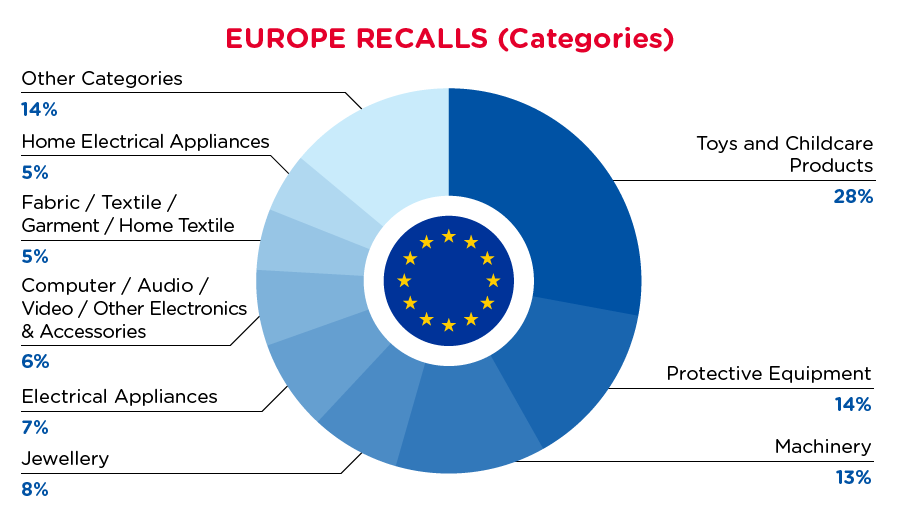 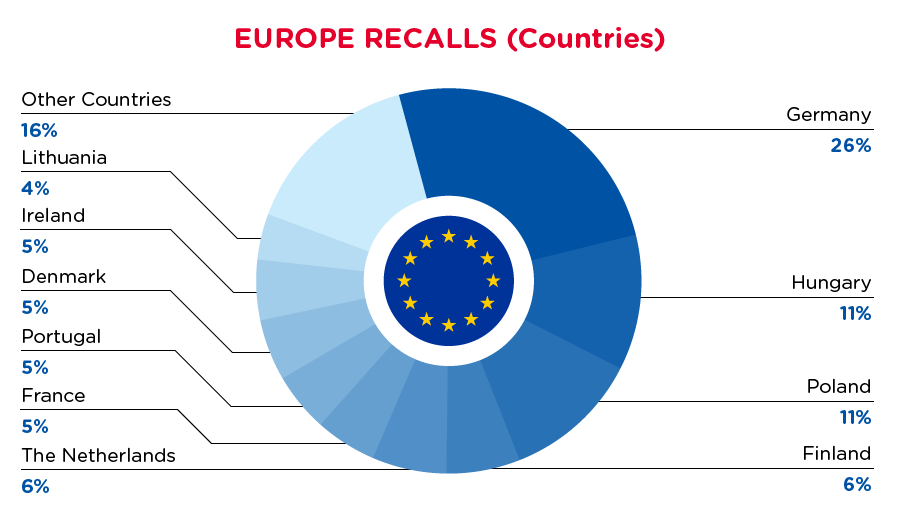 *Other Countries include Slovakia, Croatia, Czechia, Romania, Slovenia, Spain and Bulgaria with a frequency of less than 4.

On 3 August 2021, the Australian Competition and Consumer Commission (ACCC) adopted the amendment standard for projectile toys incorporating updates recently made to the voluntary Australian/New Zealand (AS/NZS ISO 8124.1) and international standards (ISO 8124.1), in addition to other minor updates.

A summary of the main amendments on the Australian Consumer Goods (Projectile Toys) Amendment Safety Standard 2021 is as follows:

This section applies to a projectile toy if it satisfies all of the following:

For the purposes of subsection (1), in determining whether:

The supplier must use the standard that is the basis for the requirements that the supplier intends to comply with.

In Australia, when hazards are identified in consumer products, they will be recalled and published in the Recalls and Safety Alerts Database on the Australian Competition & Consumer Commission website, which is updated daily. The Australia recalls from 01 August 2021 to 31 August 2021 are summarized below: 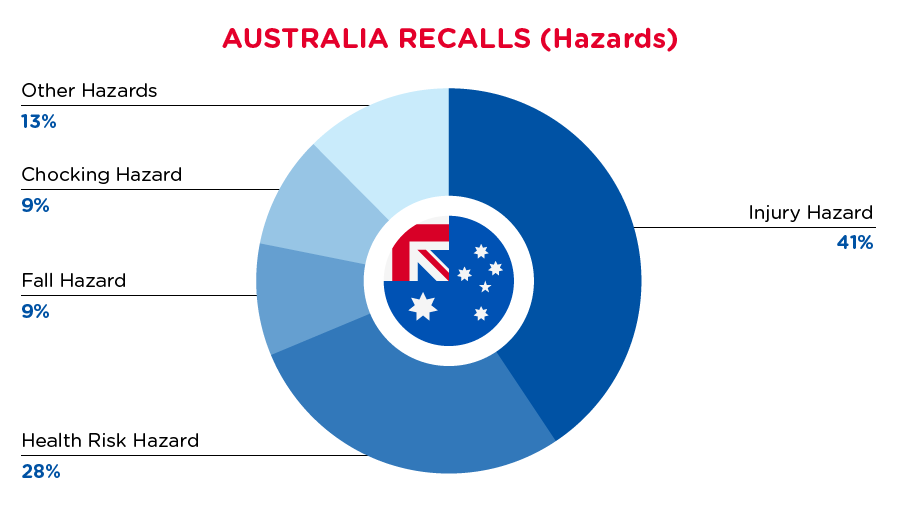 *Other Hazards include Fire Hazard, Burn Hazard, Suffocation Hazard and Electric Shock Hazard with a frequency of less than 3. 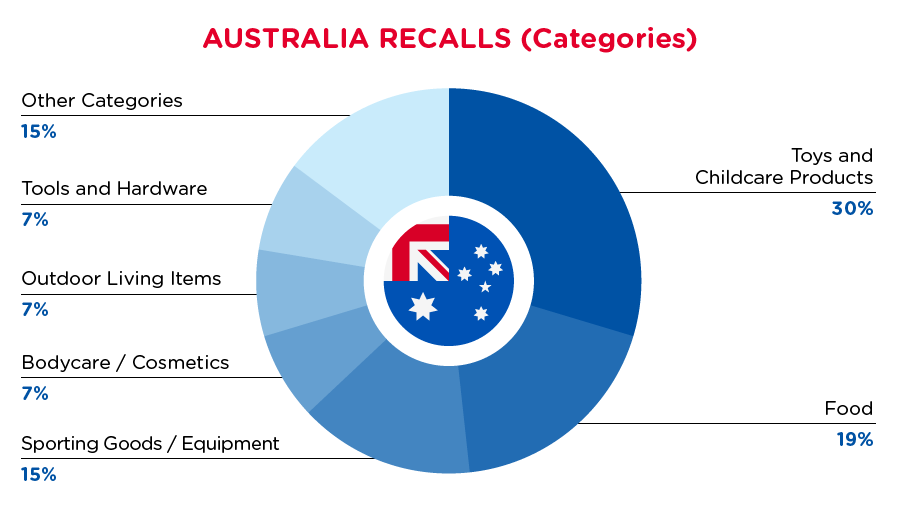 *Other Categories include Electrical Appliances, Household Items, Computer / Audio / Video / Other Electronics & Accessories and Pharmacy with a frequency of less than 2.

South Korea Ministry of Trade, Industry and Energy (MOTIE) Notice No. 2021 - 132 was published on July 2021 to strengthen the phthalates restriction as specified in the “Common Safety Standards for Children's Products” from six phthalates to seven by including DIBP for children’s products. The effective date is 1 January 2022.

The table below is a summary of the amended phthalates requirement within (MOTIE) Notice No. 2021 - 132.

Standard GB 40165-2021, Lithium-ion batteries and battery packs for stationary electronic equipment has been recently released.
The release date of GB 40165 was 30 April 2021, and the implementation date is 01 May 2022 which means there is a one-year transition period. After the transition period, products that meet the scope of this standard must meet the requirements of this standard.

Main test items are outlined below:

The new standard, GB/T 40270-2021, sets out general technical requirements based on consumers' experience and is applicable to direct-to-consumer end textile products for consumption and household use.

The National Standard GB/T 40270-2021 " General technical requirements based on consumer experience " specifically considers the standards from the perspective of consumer experience with textile products such as clothing and home use textiles, based on consumers' sense of touch, vision, and smell, etc. The characteristics of subjective perception can directly reflect the feelings and needs of consumers. The standard outlines consumer demand-oriented practices and standardizes testing parameters to help ensure consumers have a good experience and to prevent an unpleasant experience as it relates to textile products. The standard should not be used as requirements for certain types of products, nor is it recommended to be used as a basis for product quality supervision and public comparisons.

In China, when hazards are identified in consumer products, they will be recalled and published in the SAMR Defective Product Administrative Centre, which is updated daily. The China recalls from 01 August 2021 to 31 August 2021 are summarized below: 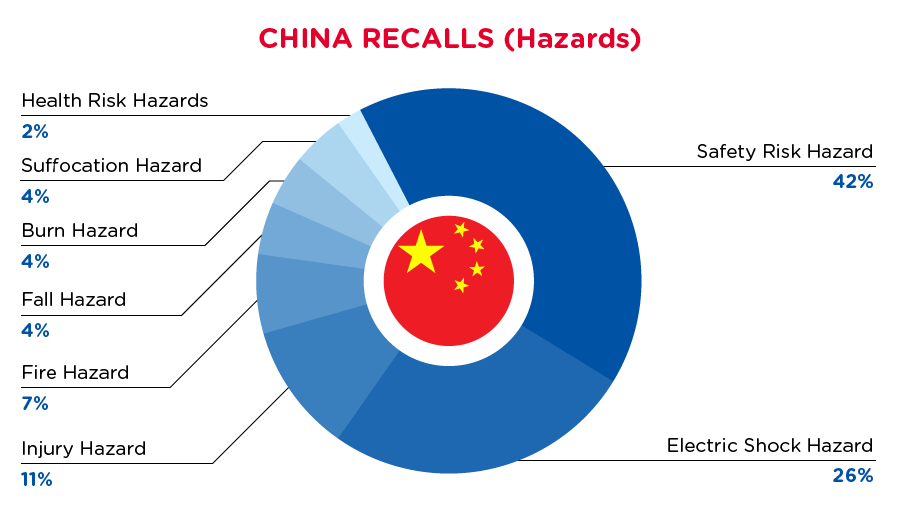 *Other Categories include Furniture, Tools and Hardware and Footwear with a frequency of less than 2. 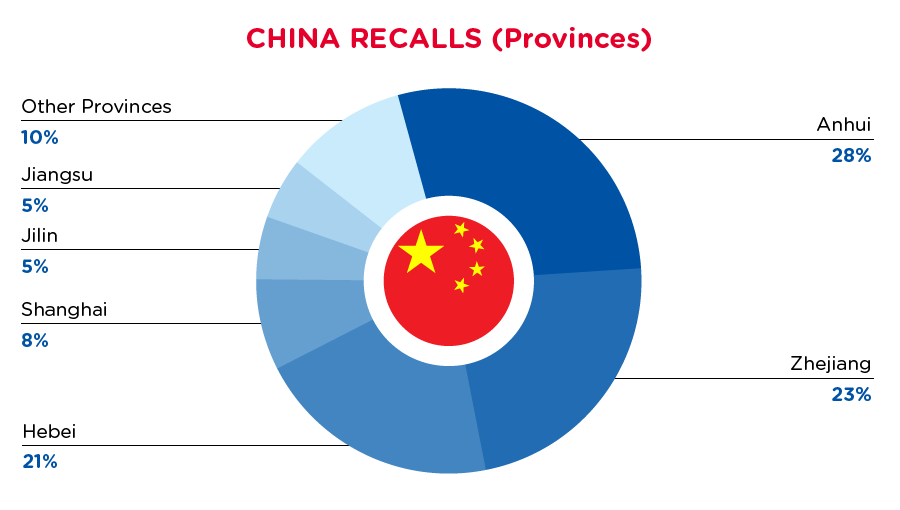 *Other Provinces include Tianjin, Hubei, Guangdong and Beijing with a frequency of less than 2.

** The province of the recall case, Motorcycle Reflexor Part on 13th August is not specified.